A few months ago I was thinking about the packaging of my beers and what I should start doing to take that part of brewing to the next level. I love how caged and corked bottles look. There is just such an elegance to unwinding the cage and popping the cork on a good sour beer. In my mind it’s one of those small things that separates beer boozers from people who really “get” the entire experience from a bottle of beer.

What got me thinking I should look into waxing bottles was the bottle sharing during the Yazoo Fortuitous release party. I was lucky enough to open a bottle of New Glarus Belgian Red and right after that open a bottle of Fifty Fifty Four Roses Eclipse. The wax on the Eclipse well eclipsed the crumbling candle type wax on the NG bottle. I wanted to do something like Fifty Fifty had done so I started looking at the prices for wine bottle wax. Wow it was expensive for wax!

A week or so later while chatting with a fellow brewer the waxing conversation started. He had waxed 48 bottles for around $6 using a very simple technique he read about a year or 2 ago: Using hot glue gun sticks and crayons. Below is my first attempt at waxing bottles using this technique to make beer bottle wax.

I got this pack of crayons at Big Lots for $1.50 and the pack of glue sticks at a local craft shop for $2.99 a pack ( I bought 2 packs). (**SEE UPDATE BELOW**) so I can get a longer wax seal on the bottle neck. The chepo brand version crayons seemed to do just fine for dying the wax. Shhhhhh don’t tell anyone but I also grabbed a few of the broken crayons from my daughter’s art supply box.

Paint stirrer, cleaned soup can and a heat distributor for the stove eye.

Next (per my friend’s suggestion) I used a clean soup can to melt the glue sticks. Both packs were pretty much melted within 15 minutes running the stove on medium high. 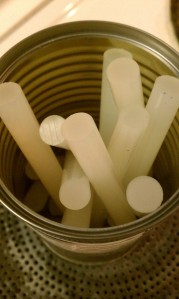 While the glue gun sticks were melting I worked on getting the crayons ready. I found that using a razor blade to slice the paper was much easier that tring to find the paper seal and peel each crayon. Just run the blade the length of the crayon then remove the paper, easy. As you can see from the picture I just broke the crayons up into smaller pieces to speed up the melting time. 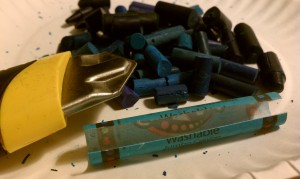 Next I dumped the broken crayons on top of the melted glue sticks. Gently mixed that around until I thought the color was consistent.

Now comes the really fun part…dipping your bottles into the wax! Make sure the mixture is hot, not boiling but maybe slightly under. If the mix is too cool then it will dry thick and quickly.  I dipped for about 1 second and gave the bottle a slight turn while it was in the wax. Then I pulled the bottled up about an inch over the can (hold bottle sideways and slowly spin) while the excess drained back into the can (probably 4-5 seconds). Set the bottle upright and let the wax cool. I did notice the color was about 10% darker when the “wax” dried.

Overall I’m really happy with how this project turned out. The color of blue is so rich and deep for the bottles. When I print out labels soon I really think these bottles will look nice. A few changes I would make is (also increasing the amount of crayons) and use a smaller can. I used a Campbell’s Chunky can, but I think I could use one of the smaller cans from a chicken noodle. I would like the seal to be a bit further down on the neck. I will increase the amount of crayons too if I increase the glue gun sticks. The amount of wax mixed with the glue sticks needs to increase so you don’t end up with a seal too hard to remove. When doing a lighter color with less crayons the lack of crayon wax something to consider. It might be wise to decrease the dip time in order to get a thinner seal.

Oh I should probably talk about the beer. The 2 batches I waxed tonight were my single brett fermented beers. 5 gallons each Brett B, C, and L. The brett L version should finish up in a few weeks. I’m looking forward to a vertical tasting with each of these beers.