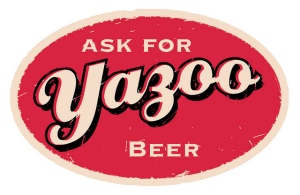 So back in July I mentioned 2 potential pieces of news I was excited about…one still needed to be confirmed, which was Linus Hall (Owner of Yazoo Brewing Company) and I were going to use one of my funky barrels to age a beer in. We talked a few times over the past year about doing some sort of funky “one off” project…well recently that project/news turned into something much bigger, better and funkier! Yazoo and I are teaming up to release an “Embrace The Funk Series” (as it will be called) of wild and sour beers!!! Yes Nashville, the funk is coming your way and soon.

How soon? How about in 2 weeks at the 12th South Winter Festival? Those who were lucky enough to get tickets before it sold out in 15 minutes will be able to sample the first release: “Wild Child”– Sue serves as the base beer: fermented with Brettanomyces and Yazoo’s house yeast …aged in a red wine barrel with dark sweet cherries and various souring microbes. This is the original single barrel batch that started the program a few months ago.

Let’s talk about the series as of now:

Some Of The Wine Barrels

So there you have it. I’m very excited to bring you this series of beers…add to that I get to work with a longtime friend (and sour beer fan) on this project and this couldn’t be any better. The project should really give me some great “tech stuff” to write about for the website.  Fans of my Q&A’s, I’m still planning on doing those interviews too. Basically the website should get better all the way around as Linus and I work on each different beer.  Will there be some hang ups or a beer that didn’t turn out the way we expected? Yes and you can bet I will write about too.

So stop by the Yazoo booth in a few weeks at the Winter Warmer and chat with us about the project. Cheers!

Purging a barrel with co2 right before transfer

10 thoughts on “We want the Funk…Give up the funk!”