So after months of waiting our custom built coolship finally arrived on February 21st! I have been extremely excited about adding this piece of equipment to the ETF program since I made our first 100% Spontaneously fermented beer back in 2012. “Clarence” was the name of that beer and despite only making about 15 gallons to sell in the taproom and serve at Funk Fest that beer went to the medal round of GABF in 2014. Since then I’ve done some other Spontaneous/Coolship at Yazoo. We do have some older spontaneous beer hanging out in a single barrel that will be released at some point. But now we have the ability to produce alot more spontaneous!

Shown with a removable wort chiller to use when ambient temps are a bit too warm.

Before I tell you about the brewday and our coolship, I want to thank a few people who were a big help with education, techniques, design and most importantly inspiration: Jeffery Stuffings, Sean Spiller and Averie Swanson of Jester King, Jean van Roy of Cantillion, Jason Perkins of Allagash, Vinnie Cilruzo of Russian River Levi Funk of Funk Factory, Chad Yakobson of Crooked Stave, James Howat of Black Project and Chase Healey of American Solera. All these fine brewers were very helpful and forthcoming with what has worked for them and even what hadn’t.

Our 600 gallon coolship is designed to be mobile. It has to be transported from our off site barrel cellar to the main brewery on brewday and fit within our space upstairs to cool, so with those limitations in mind we also designed it to fit a trailer with 2 “Tote Tanks”. Why that setup? Well my hope is that we can take our coolship out to some of the local fruit farms and our hop field to inoculate the wort.

Brewday! We followed a traditional Turbid mash schedule  to create a starchy strong wort to boil for 3 hours. Our grist consisted of 70% Pale and 30% Raw wheat grown locally in the Nashville area. We aimed for a gravity of around 10 plato.

We have been aging hops for a few years and use aged hops in all of our “sour blondes”, so I have plenty of whole leaf hops to select from. We had some 2011 East Kent Goldings that had aged very well that I hopped with at a rate of 1/2lb per bbl of wort. Our batch sizes are 40bbl so we used 20lbs of hops. Our normal aged hops rate is around 1lb per bbl, but for the first batch I opted to see what sort of “sour level” we would get with 1/2lb..

After a long 3 hour boil and some spicy pepper pizza it was time to transfer into the coolship to allow the wort to cool down overnight and become inoculated with the native and wild microbes in the air. The next morning the temp of the wort was around 70f and 68f by the time it was in neural oak. We had a 4 1/2 day lag time before visible fermentation started, which for our first time on a large scale I feel like it really really good. I don’t expect that every time. I know Cantillon has had barrels finally take off months later. Below are some pics of the brewday. Hope you enjoy! 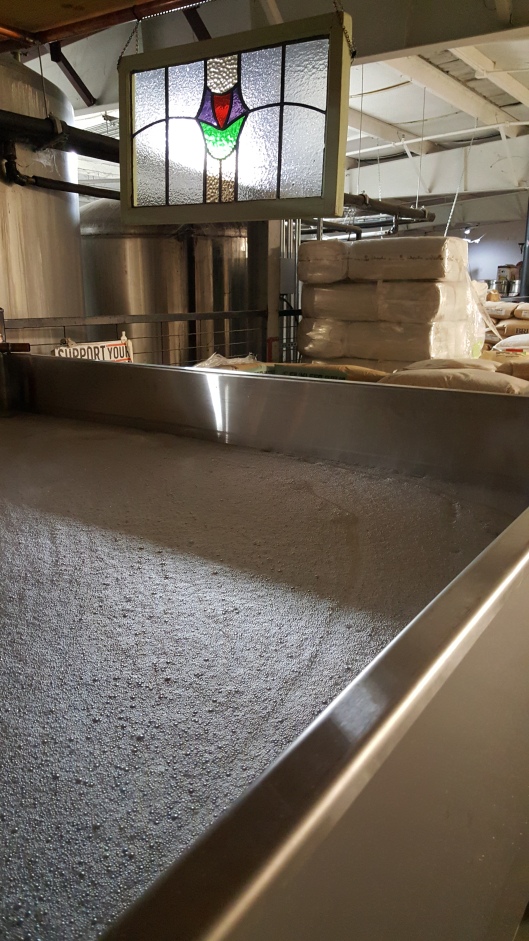 Coolship on the maiden voyage and some stained glass for good luck! 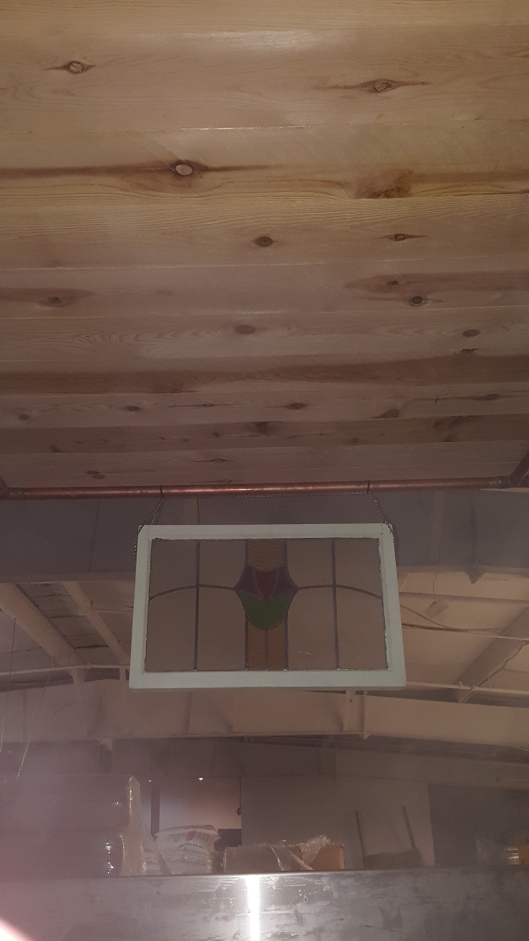 We built a removable roof made from Tennessee  Cedar planks. This helps to absorb some of the steam.

Linus and me toasting the awesomeness of the day

Below video shows the wort movement as the airflow moves by 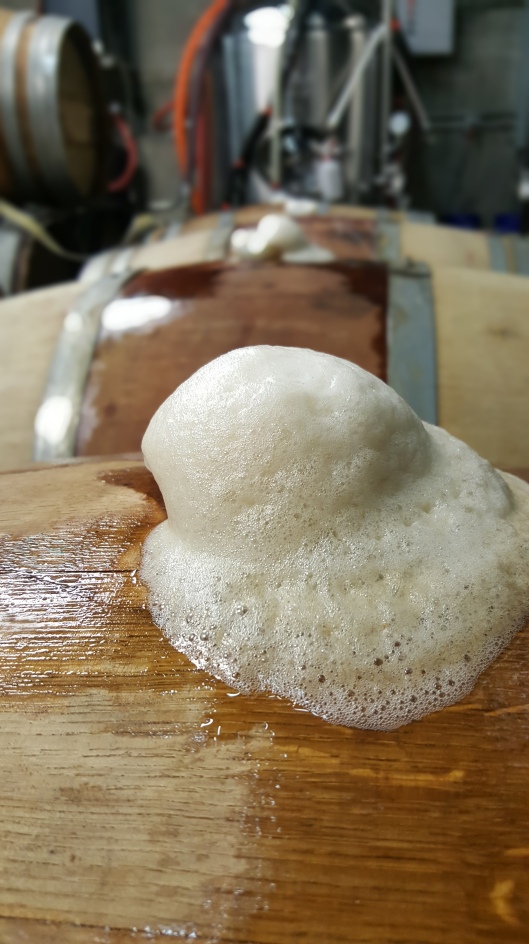 We’ve got something fermenting!

Some delicious Spontaneous beers were enjoyed on brewday. The bottle on the right is the 2nd to last one of 2012 Clarence.